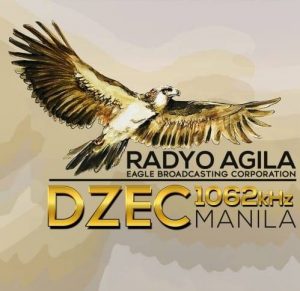 • DZEC Radyo Agila (1062 kHz Metro Manila) is the flagship, all-news AM station of Eagle Broadcasting Corporation . The station’s studio is located at EBC Bldg., 25 Central Ave., Diliman, Quezon City and its transmitter is at Obando, Bulacan

• Radyo Agila holds the distinction for being the first KBP Golden Dove Awards People’s Choice for AM Station, winning by a landslide margin over its nearest competitor. DZEC remains as the overwhelming choice of radio listeners, reigning as the most listened to AM Station for two consecutive years (2009 / 2010).

• It was in 2011 when DZEC halted its transmissions after the wake of Typhoon “Pedring” (Nesat). But after a year and a half of silence, DZEC went back on air. It formally resumed full operations on April 26, 2013 during the 45th anniversary of Eagle Broadcasting Corporation.

• In December, 2013, Radyo Agila became the first content partner of TED Radio in the Philippines, bringing to viewers inspirational programs that are heard all over the world.

• On January 2, 2014, Radyo Agila was launched in live audio streaming over Eagle News PH (www.eaglenews.ph), EBC’s official news website. It can now be heard over 90 percent of the world via internet. in a survey of all AM Radio Stations in Metro Manila conducted